Mudhen has a multitude of dining spaces both indoor and outdoor, and the focus of the Horticultural Society is to beautify the indoor and outdoor spaces at the restaurant, while also learning about plants & nature. The outdoor dining spaces at Mudhen include their Beer Garden: an uncovered, large patio space that has a great view of the Downtown Dallas area, and their Cow Porch: a covered, smaller patio space that is intimate and beautiful.

Initially, the society – or “club” if you will – was started in the Spring of 2017, and the members met once a month in it’s prime during the Spring & Summer months! As things got colder, and the temperatures became inconsistent, the meetings were halted.

At the beginning of November, I left my position at Mudhen, and I found myself with a lot more time on my hands, so I reached out to Tim.

At that time, he explained to me that he was planning the “Winter Garden”, meaning he was thinking about all of the different plants that he wanted to incorporate into the garden space, to replace all of the waning Spring & Summer crops presently there, such as: Eggplant, Summer Squash, Okra, Collard Greens, Green Onions, Garlic, and various other Spring & Summer fruit-bearing plants.

Tim told me that he wanted to incorporate a lot of Swiss Chard, Kale, and other greens along with the existing Mint, Rosemary, & Thyme plants that he intended to leave in the garden space. He explained that he wanted to leave those fresh herbs in the garden because they are “Evergreen plants”- meaning, like the popular “Christmas Trees” that we see during the wintertime, Mint, Rosemary, & Thyme are able to withstand the cold temperatures outdoors and still grow, and prosper.

During the past 4 weeks, Tim & I worked together pulling, re-planting, and nurturing the plants in the Beer Garden. He also took the time to show me a thing or two about hydroponics, and how to work within a Green House environment. Mudhen has a Green House too – how cool is that?!

Tim explained to me that the plants that he chose all served a purpose because the Executive Chef and the Bar staff will both able to pull the things that they need from the garden, as they need it.

This Tuesday was actually going to be the “final” Horticultural Society meeting for the year.

Tim explained that once we finished planting Swiss Chard on the Cow Porch, and removed all of the hanging planter baskets in the Beer Garden, that there would be no more work to do until Spring 2018!

Once we finished up on the Cow Porch, we moved on to the Beer Garden. Tim already gave us our mission: remove the hanging baskets from the rotating conveyor belt that takes the plants all around the beer garden. He called this “winterizing the conveyor belt”.

Power and I quickly got together a system, and pulled down all of the hanging baskets. 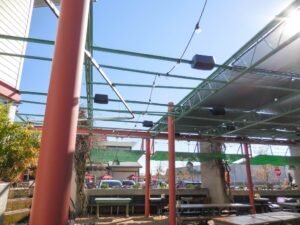 Once we finished Phase One, we were tasked with emptying all of the planters, and stacking them together, to be stored for the winter. 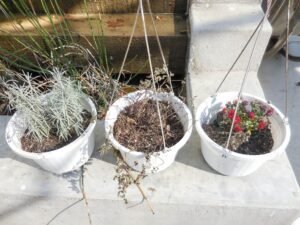 This took no time  at all, and then we were all done! It was bittersweet, thinking about the fact that there would be no more work to do for months, but then I also realized that I had so much to be grateful for.

I had learned so much invaluable information during my short time volunteering at Mudhen, information that I would be able to incorporate into my future endeavors. It also made me feel so good to think about how beautiful both the Beer Garden and the Cow Porch looked, and knowing that I had a hand to play in this. Tending to and nurturing plants is something that brings me immense joy.

After my experience with the Mudhen Horticultural Society, I was inspired to reach out to existing organizations within the Dallas County area that focus on a connection to nature, education, and children. These three elements are ever present within my reality, and I wish to nurture, and explore these things, to gain some understanding of how they interrelate with myself. 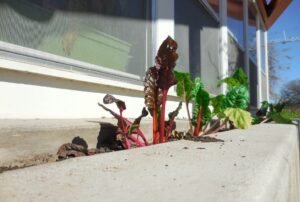 In the meantime, have you ever volunteered your time? If so, when or where? How did you feel afterwards? Comment your thoughts below!

I'm Michaela, a tropical-transplant based in the the heart of Texas. I started this lifestyle blog in 2016, and I've been sharing the ways that I navigate self-care, healing, and wellness ever since. Have a look around, and remember to take care of yourself today!